Where to get the best view and things to consider

There are several things anyone hoping to view an eclipse needs to keep in mind. Are you anywhere near the event? What’s the weather going to be like? Can you move to a new location if clouds move in? And these are just some of the basics. Below are some of the details you need to include in your planning to photograph the eclipse in August.

Are you near the event?
The biggest question is what path will the moon’s shadow take and will you be near it? In the US the path starts in Oregon, passes diagonally through the mid-west, and exits the continent through South Carolina. This is called the “path of totality” – the path under which the sun will be fully eclipsed.

Can you see the eclipse if you are not directly in the path of the moon’s shadow – yes! However, you will only see a partial eclipse. The further you are from the path of totality, the less of the sun’s disk will be covered by the moon. In my native Southern California, less than 50% of the sun’s disk will be covered. Neat to see, but not spectacular if great eclipse photos are your goal…

Weather
Nothing would be worse than planning a trip and hauling all your gear, only to have clouds move in and block your view. Most weather forecasts are spot on accurate only a day or two out… Trying to predict the weather several months into the future is a futile enterprise… That said, there is a lot of information on historical weather and reasonable guestimations on possible cloud cover. The folks at eclipse2017.org have put together a graphic showing the average percentage of cloud cover, a historical cloud cover average, and historical cloud cover broken down by type (clear, scattered clouds, broken clouds …) here. Spoiler, if you are on a boat off of either US coast, odds are you will see 60% cloud cover or more. The highest average of any location along the path…

Mobility
Knowing that we can’t predict the weather requires developing a plan B. Having the ability to shift location, maybe by hundreds of miles, may make or break your chances of coming home with the photos you are after.

In So. Cal. I am used to having several different options for getting around. There are multiple interstates traveling north/south and just as many traveling east/west. If the path of totality were over Los Angeles, getting around (except for the traffic) would be easy. However, many of the locations in the path of totality are in rural, sparsely populated areas. Many small communities only have one way out of town in each direction. Your options to change location could be limited by the lack of roads.

Be mindful of your transportation options and plan your alternate locations way in advance. Also, give yourself plenty of time the day of the eclipse. If you need to change location because of weather, chances are that hundreds, if not thousands, of people will be doing the same thing. Allow for traffic and the pandemonium of those that didn’t have their plan B ready in advance.

Public vs. Private Property?
This is a big one! Most communities are made up of a small amount of public property (parks, community centers…) surrounded by private property. People’s homes, businesses, and farm land are all private property. These places need to be respected as the penalties for trespassing vary from a stern “talking to” by law enforcement to hefty fines. If where you want to shoot from is on private property, make sure you get permission to be there. Preferably in advance. No one wants to have 50 people knock on their door asking for permission to shoot in their yard or the parking lot of their business the day of the eclipse.

If you are shooting in a city/county park or at an eclipse oriented event, you may need to obtain a permit. You should check with the municipality in question if you have any questions. I already know that Rigby ID does not require permits… I cleared that up with Angie in the City Clerks office…

Where Am I Going to Be? 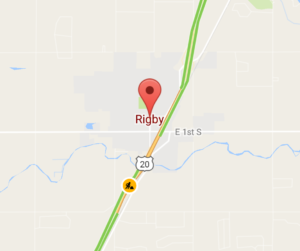 I am lucky enough that my day job is sending me to Salt Lake City – a three hour drive from where the path of totality crosses South-East Idaho. I currently have campground reservations in Rigby ID. Rigby is a few miles from the center line of the path of totality. They are also throwing one heck of a party on Main St (details at totalityawesomerigby.com). They, as of this writing, have campground spaces available – use the contact page on their web site to make a reservation.

Rigby has no permit requirements and is surrounded by a few small lakes and potato fields. If heat becomes an issue, shooting over water may help reduce the radiant heat from the ground.

If cloud cover becomes an issue I have the ability to head north-west, further into Idaho, or south-east into Wyoming or Nebraska. Given that I will have a rental car, I am willing to drive up to about five hours in either direction. That’s almost 500 miles of the path of totality available. Not a bad stretch. The only real problem is all of the national parks/forests that must be navigated around if I end up having to go very far.

My plan is to be set up by one of the lakes near Rigby. Hopefully most of the campers will head into town for the festivities and I will have my run of the place. I’m never that lucky – we’ll see where I end up.

I will have a day before article posted on August 20th with updates on where I will be, so stay tuned. It would be great to meet a few of you reading these articles.

Where Will You Be?
Leave me a note in the comments below. It would be great to hear what locations others have come up with.